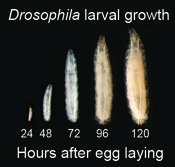 Why study sex differences?
﻿﻿Male-female differences in growth,  stress responses, and lifespan are widespread in the animal kingdom. In addition, there are important sex differences in disease incidence and progression. In order to address these differences in health outcomes, we need a better understanding of the molecular, biochemical and physiological differences between males and females.  In the Rideout lab, we use the fruit fly, Drosophila melanogaster, as a model to determine how the sex-specific regulation of cellular processes leads to differences in body size, stress survival, aging and disease.﻿﻿

Drosophila as a model....
to study growth control
We use Drosophila larvae as a model for several reasons. First, over a relatively short period of five days, larvae increase in mass by approximately 200-fold. This growth is influenced by the sex of the animal. Although male and female larvae are morphologically similar, by the end of the larval period, females are approximately 20% larger than males. Larvae have two main types of tissues: endoreplicating tissues (eg. fat), that increase in mass due to an increase in cell size; and mitotic tissues (eg. imaginal discs), that increase in mass due to an increase in cell number. Therefore, by studying larval growth, we can examine the regulation of both cell growth and cell proliferation. Second, the pathways that are known to regulate growth in Drosophila larvae are very well conserved in other animals, including mammals. This means that our findings on how growth is regulated in Drosophila can advance our understanding of growth control in humans. Third, sophisticated genetic tools are available to allow us to exert precise control over gene expression in space and in time during development. So we can manipulate gene expression to study how an individual gene affects growth in just one cell in a tissue, in a group of cells in a tissue, in all of the cells in a tissue, in groups of tissues, or in the whole animal!

to study stress responses
Both Drosophila larvae and adult flies can be used to study how the animal responds to stress. In flies, as in other animals, males and females have different stress responses. Examples of stresses include nutrient deprivation, hypoxia (lack of oxygen), immune challenge and oxidative stress. We can measure how well the larvae/flies respond to stress by simply measuring survival following exposure to a particular stress. We can also examine the responses of individual cells to stress by measuring changes in gene expression or in energy metabolism. An important advantage of using flies to do these types of studies is that we can examine responses to stress in the context of a whole animal, to determine how different cells, different tissues and different organ systems respond to stress. In addition, we can investigate how different tissues co-ordinate their responses to stress to promote survival. Since the pathways that regulate stress responses in flies are very well conserved in animals, including mammals, our findings on sex differences in stress responses can be readily translated into other model systems.

to study aging (...and did you know that flies can live about 80 days in the lab?!)
Drosophila males and females have different lifespans - females typically live longer than males. There are also important differences between the sexes in how they respond to life-extending manipulations. Along with studies in yeast and the nematode C. elegans, flies have played an important role in advancing our understanding of the molecular mechanisms underlying aging. Again, many of the same pathways that regulate lifespan in flies are conserved in other animals as well.

Techniques we use in the lab: